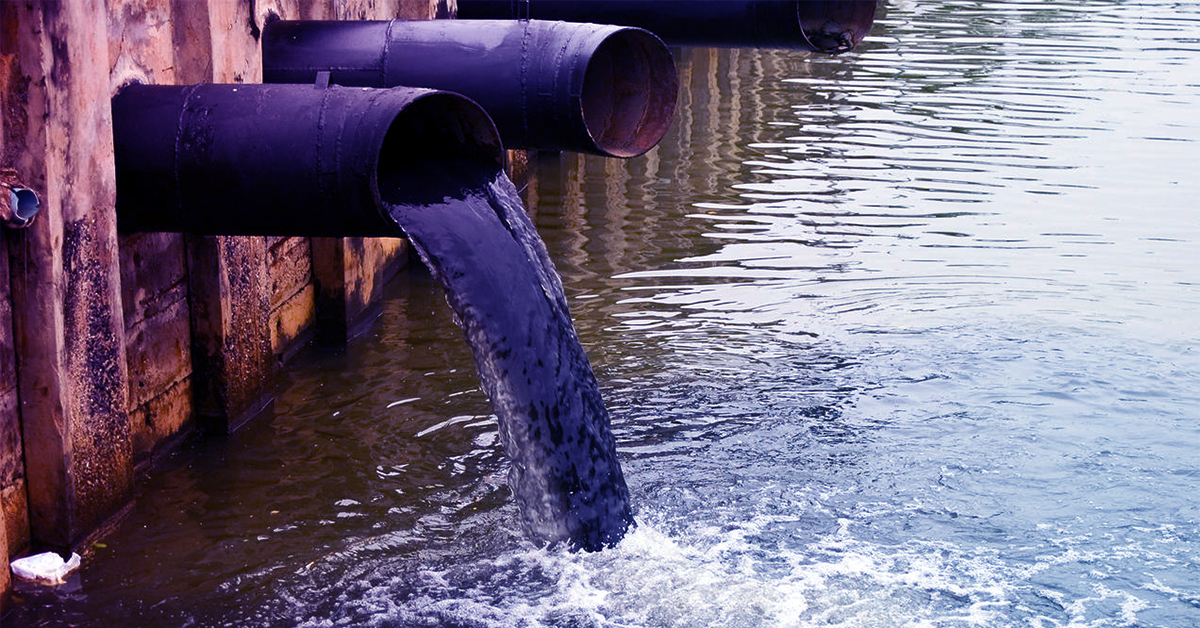 Industrial water pollution has been a pressing matter in recent years. Day by day water pollution increases, increasing the damage it causes to water bodies, aquatic life, and humans.

Even though manufacturing has been a key factor for the growth of the world, it is also the cause of critical problems, including the increase of water resource use and water pollution.

Water pollution occurs when harmful substances, often chemicals or microorganisms, contaminate a stream, river, lake, ocean, aquifer, or other body of water, degrading water quality and rendering it toxic to humans or the environment.

Water has the ability to dissolve more substances than any other liquid on earth which is the cause of water being easily polluted. Toxic substances from farms, towns, factories, and homes readily dissolve into and mix with it, causing water pollution.

If action is not taken it is predicted that by 2050 the demand for freshwater is expected to be one-third that it is now, increasing challenges.

Groundwater is the water that is held underground in the soil or in pores and crevices in rocks. It is one of the most important yet least seen natural resources. Almost 40% of Americans depend on drinking groundwater that is pumped to the surface of the earth. For some rural people, it is the only source of freshwater. Groundwater is polluted when pollutants, from pesticides and fertilizers to landfills and sewage treatment facilities to leach waste, invade the groundwater and make it dangerous for human consumption. Removing pollutants from groundwater can be difficult, impossible and expensive. Once contaminated, aquifers can become unusable for decades or even thousands of years. Groundwater can also infiltrate streams, lakes and oceans and spread pollution far away from the original source of pollution.

Surface water covers about 70% of the globe and fills our oceans, lakes, rivers, and all other blue spots on the world map. Surface water from freshwater sources (that is, non-sea sources) accounts for more than 60 percent of the water supplied to American homes.

However, a significant pool of that water is at stake. According to the latest National Water Quality Survey of the U.S. Environmental Protection Agency, nearly half of our rivers and

streams and more than one-third of our lakes are polluted, making them unsuitable for swimming, fishing and drinking.

Nutrient pollution, including nitrates and phosphates, is the most common type of pollution in these freshwater sources. Plants and animals need these nutrients to grow, but the extra outflow of these nutrients from agricultural waste and fertilizers causes them to be major pollutants.

Municipal and industrial waste emissions also account for a significant proportion of toxins. There is also all the trash that industry and individuals throw directly into the waterways.

8% of ocean pollution (also known as marine pollution) occurs on land, whether along the coast or inland.

Pollutants such as chemicals, nutrients and heavy metals are transported from farms, factories and towns through streams and rivers to bays and estuaries. From there they go out to sea. Marine debris, especially plastic, on the other hand, is washed away through rain gutters and sewers.

Our oceans are also polluted by oil spills and leaks and are constantly sucking up carbon pollution from the atmosphere. The ocean absorbs up to a quarter of anthropogenic carbon emissions.

When contamination comes from a single source, it is called point source pollution. Examples of this are wastewater that is legally or illegally discharged from manufacturers, oil refineries, or wastewater treatment plants, and pollution from leaky sewage treatment plants, chemical and petroleum spills, and illegal. Point source pollution occurs in specific locations, but can affect miles of waterways and oceans.

Needless to say, water pollution cannot be contained by lines on the map and specific boarders. Transboundary pollution or cross-border pollution is the result of contaminated water from one country entering water from another.

Pollution can be caused by disasters such as oil spills, or by slow creep downstream of industrial, agricultural, or municipal emissions.

Here are a few sources of water pollution;

Effects of water pollution on humans

Waterborne pathogens, in the form of diseases caused by viruses and bacteria from human and animal excrement are main causes of illness caused by contaminated drinking water. Diseases transmitted through unsafe water include cholera, giardia, and typhoid fever. Even in wealthy countries, accidental or illegal releases from sewage treatment plants and spills from farms and urban areas carry harmful pathogens into waterways.

Heavy metals such as arsenic, mercury as well as pesticides and nitrate fertilizers are finding their way into our water supplies. Once these toxins are ingested, they can cause a variety of health problems, from cancer to hormonal imbalances and changes in brain function. Pregnant women and children are especially at risk.

Effects of water pollution on the environment

To flourish, healthy ecosystems rely on a complex network of animals, plants, bacteria and fungi. All of these interact directly or indirectly. Damage to any of these organisms can create a chain effect that endangers the entire aquatic environment.

Water pollution causes eutrophication, where water bodies are essentially lifeless. In some cases, these harmful algal blooms can also produce neurotoxins that affect wildlife, from whales to sea turtles.

Chemicals and heavy metals from industrial and urban wastewater also pollute water bodies. These pollutants are toxic to aquatic organisms, usually shortening their lifespan and fertility, and climbing the food chain when predators eat their prey. This is how tuna and other large fish accumulate large amounts of toxins such as mercury.

Marine ecosystems are also threatened by marine debris, which can strangle, choke and starve animals. Much of this solid waste, such as plastic bags and soda cans, is washed away in sewers and canyons and eventually flows into the ocean, turning our ocean into garbage soup and sometimes condensing in the place of floating garbage. Abandoned fishing gear and other types of debris are responsible for harming a large number of different marine life.

On the other hand, ocean acidification makes it difficult for shellfish and corals to survive. It absorbs about a quarter of the carbon pollution generated each year by burning fossil fuels, but the ocean is becoming more and more acidic now. This process makes it difficult for shellfish and other species to make clams and can affect the nervous system of sharks, clownfish, and other marine organisms.

How to reduce pollution

Releasing treated water rather than untreated water from households and factories to the environment can make a huge difference.

Daiki Axis Sri Lanka provides Johkasou systems ranging from domestic Johkasou to regular Johkasou and advanced Johkasou systems. These systems will help in treating polluted water from households to factories before being released to the environment.

We at Daiki Axis Sri Lanka promote conservation of water in Sri Lanka. We have not only followed the path of providing our customers with safe water, but also towards becoming an “eco-creation and development company” that protects the environment.

Do your part in protecting the environment.

Close Menu
We use cookies on our website to give you the most relevant experience by remembering your preferences and repeat visits. By clicking “Accept All”, you consent to the use of ALL the cookies. However, you may visit "Cookie Settings" to provide a controlled consent.
Cookie SettingsAccept AllRead More
Manage consent

This website uses cookies to improve your experience while you navigate through the website. Out of these, the cookies that are categorized as necessary are stored on your browser as they are essential for the working of basic functionalities of the website. We also use third-party cookies that help us analyze and understand how you use this website. These cookies will be stored in your browser only with your consent. You also have the option to opt-out of these cookies. But opting out of some of these cookies may affect your browsing experience.
Necessary Always Enabled
Necessary cookies are absolutely essential for the website to function properly. These cookies ensure basic functionalities and security features of the website, anonymously.
Functional
Functional cookies help to perform certain functionalities like sharing the content of the website on social media platforms, collect feedbacks, and other third-party features.
Performance
Performance cookies are used to understand and analyze the key performance indexes of the website which helps in delivering a better user experience for the visitors.
Analytics
Analytical cookies are used to understand how visitors interact with the website. These cookies help provide information on metrics the number of visitors, bounce rate, traffic source, etc.
Advertisement
Advertisement cookies are used to provide visitors with relevant ads and marketing campaigns. These cookies track visitors across websites and collect information to provide customized ads.
Others
Other uncategorized cookies are those that are being analyzed and have not been classified into a category as yet.
SAVE & ACCEPT